If you’re looking to lower your cholesterol, consider eating a serving of pecans every day.  According to a new study published in The Journal of Nutrition, this can dramatically improve your cholesterol levels.

The study was conducted by the University of Georgia and involved 52 adults between the ages of 30 and 75 who were at higher risk of cardiovascular disease with high cholesterol or a BMI of 28kg/m2 or more.  They were randomly divided into three groups, with the first group adding 68 grams (470 calories) of pecans to their current diet, the second group substituting 68 g of pecans for 470 calories out of their current diet, and a control group.  After 8 weeks there was a significant reduction of 5% in total cholesterol, and 6 – 9% in LDL (bad) cholesterol in the two pecan groups, with  similar numbers for those who added pecans as well as those who substituted them.

Some of the participants in the study “went from having high cholesterol at the start of the study to no longer being in that category after the intervention”, according to Jamie Cooper, one of the researchers.  “The addition of pecans to the diet not only produced a greater and more consistent reduction in total cholesterol and LDL compared to many other lifestyle interventions, but may also be a more sustainable approach for long-term health.”  A previous analysis of 51 exercise interventions resulted in an average reduction of only 1% in total cholesterol and 5% in LDL.

The results are in line with the established research showing that three nuts are cardioprotective.  They’re high in healthy fats as well as fiber, both of which help lower cholesterol.  In addition to adding pecans to your diet, follow these guidelines to improve your cholesterol levels.

Improve your cholesterol and your overall health by eating a mostly plant-based diet that includes around 68 g or 2/3 cup of pecans per day. 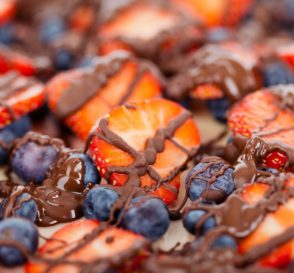 It’s becoming clear that one of the most important words to understand in your nutritional language is flavonoids.  These are plant-derived compounds commonly found in fruits, vegetables, tea, chocolate, and red wine.  Many studies have been done showing the health …
Brigitte Kelly|August 26, 2021|