A study published last month in the BMJ Journal Heart confirms what we’ve known for a long time, that the Mediterranean diet is excellent for heart health and weight loss.  It also determined that the benefits are even greater when you make the diet greener.

The traditional Mediterranean diet is based on eating vegetables, fruits, herbs, nuts, beans, and whole grains.  It allows moderate amounts of dairy, poultry, eggs, and seafood, while only eating red meat occasionally.  The green Mediterranean diet cuts out all red meat and processed meat; it includes 28 g (1/4 cup) of walnuts, 3 – 4 cups of green tea, and 100 g of green, plant-based protein per day*.

This study provides further support for the benefits of an all or mostly plant-based diet which restricts meat intake and instead substitutes plant proteins.  (*Note:  this study gave the green Mediterranean diet group a daily shake made with Wolffia globosa, also known as duckweed, which has been eaten for centuries in places like Laos, Vietnam, and Thailand, and is known as “meat for the poor” because of its high protein content).

Transitioning to a green Mediterranean diet can be gradual, easing out animal proteins and replacing them with plant-based options as often or as seldom as you choose.  The foods you eat should include the following:

Avoid fast food and processed foods as well as deli meats, bacon, or sausage.  Eat whole, plant-based foods as close to their natural state as possible and go green! 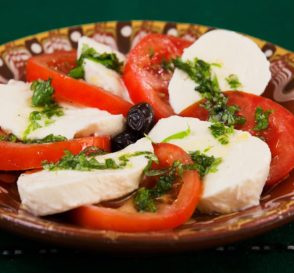 A study published on May 22, 2019 in the JNCI Cancer Spectrum provided an even clearer picture of how diet affects cancer risk.  Over 80,000 new adult cancer cases in 2015 were directly attributable to dietary factors.  The main contributors were: …
Brigitte Kelly|June 7, 2019|